Manual Therapy is the bread and butter some clinicians might say when it comes to treatment. There are various schools of thought on treatment application. This is a short report on my thoughts on Passive therapies and the evidence and critiques surrounding it. The discovery of pain science and a better understanding of brain neurophysiology has changed the way we think about treating patients.

So does this mean we should stop using manual therapy, massage or acupuncture? Where does that leave practicing clinicians? It’s more about fully understanding the need and how it can complement education and exercise.

What are passive therapies?

I believe that most of us became health professionals because we all had a genuine interest in helping people, understanding how the mind-body works, reacts and interacts with its environment.  I know that was what did it for me.  A long time ago I did a placement with a physiotherapist back in Scotland in the early 90s. I remember watching him use an array of assessment techniques for structural differentiation, use palpatory techniques to determine movement dysfunction and use a number of passive therapies such as acupuncture, ultrasound, laser, interferential therapy, TENS, a traction table and the ever amazing heat lamp! The variety of tools he had reminds me of the classic Monty python sketch where the doctors ask for all the fancy medical machines including the one that goes ping! 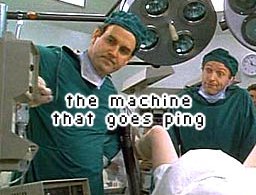 That wasn’t all, the physiotherapist used a variety of manual techniques including massage, mobilization, manipulation, Acupuncture, transverse frictions, Muscle Energy Techniques and stretching.  So all these tools and techniques are deemed passive therapies where the patient really does nothing just sits back and gets treatment. Exercise was also included but took a bit more of a back seat. I found this really interesting as exercise is an active therapy and physiotherapists are all about recognizing dysfunction and optimizing movement and function, so why was there so little emphasis on exercise? Perhaps that was the physiotherapists approach.  There could be any number of reasons…….

So when I became a student physiotherapist I wanted to get my hands on all these weird and wonderful machines and push, pull, poke, rub, stretch, manipulate, traction etc! Alas whilst I was going through my training a lot of the electrotherapy machines were coming under scrutiny and being researched heavily regarding their effectiveness, as in there really is none (reference, reference, reference, reference).  Just as soon as I was ready to start, the machines were going out of fashion like elbow patches and shoulder pads!  Although I have seen elbow patches making a comeback, which I kind of like!  I digress, so the machines that went brrr, buzz and ping became less and less popular, but that was ok I became a qualified physiotherapist and I had my manual therapy skills, I was safe, I could perform the techniques and see the amazing results!!

As a new graduate working in the NHS and in private practice I saw my supervisors performing manual therapy techniques in many different ways. Different to other physiotherapists and health professionals I had previously observed. I had witnessed a variety of techniques such as Myofascial release, trigger points, frictions, McKenzie, Maitland, Mulligan, McCarthy, Osteopathic mobilization and manipulations, teaching me about depth, pressure, feeling movement, spasm, resistance, what grade of mobilization to apply and when.  I wanted more so I went on a variety of courses to teach me the skills and over time I was loving it and getting results and I was feeling pretty clever about my refined hands on skills, nothing could stand in my way. I was like batman with my own utility belt!! 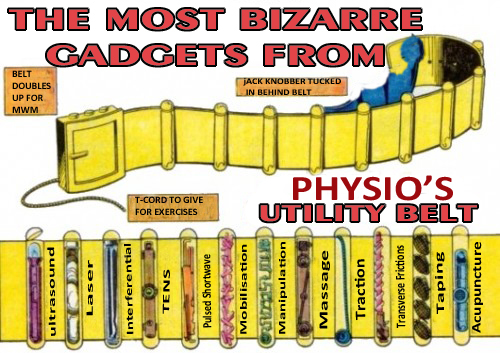 I was buzzing like being on a winning streak at poker, patients would get off the couch and be in awe at the miracle of my healing hands! Looking back I can honestly say it was not every patient but at the time when you got someone better you were buzzing. I then began to wonder about the explanations that I was being told from my supervisors and other health professionals such as resetting the joint and putting it back in place or the difference between active and latent trigger points. Seeing the amazing effects this had on patients was just astounding to me! Of course what actually happens at a tissue level with passive therapies is questionable (reference, reference) that resetting a joint or putting it back in place is incorrect and somewhat damaging terminology (reference, reference). Over time I found that some patients would become more and more dependent on the clinician to help them.  That some patients became frustrated because they were not getting better and that pain persisted.  It was uncommon to see an acute pain patient in the NHS and the same techniques that worked on acute patients in private practice were not working on persistent pain patients.

I’ll take your brain to another dimension

As a physiotherapist the focus for me is on promoting health, well-being and independence, so why then were some patients not getting better with my manual therapy techniques?  Maybe it was the treatment? or that they weren’t getting better? the social interaction? maybe it was laziness? maybe it was dependency? maybe it was the fact that people were living at 100 miles an hour in their busy working lives and they needed someone to help with their pain there and then so that they could continue functioning at 100 miles an hour on that day?? Wow that was a mouthful and breathe in!! So what can explain this?  Well neuroscience has opened a door way to another dimension and another tool to the physio utility belt. I am fascinated by it! I am certainly no expert on this topic, yet neuroscience (particularly pain science) can explain why some patients don’t get better and that like any other body system the nervous system can fall into a state of disease.  It can also explain how passive therapies will help to reduce pain, muscle tone and fear but that the use of manual therapy long term can create dependency.  I will be posting info up on chronic pain at a later date. 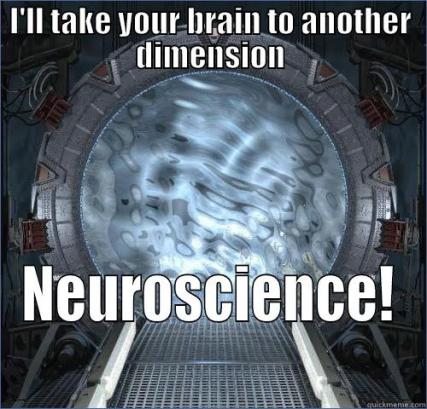 So what’s your point??

The power of touch

So this can be a sensitive subject (no pun intended) as there are a lot of clinicians that use manual therapy as their main treatment approach and that is fine I don’t argue with their philosophy and beliefs.  Touch however is very powerful it provides many of the same effects as passive therapies (reference) as does relaxation, meditation, positive thinking etc (reference).  Again I am not saying that passive therapies don’t provide the effects that I am looking for otherwise I wouldn’t use them.  My point is that the evidence is hazy regarding the true nature of their effects. I would advice to be mindful of how often you are using passive therapy and making sure that you have a clear understanding of the expectations of the patient. Then challenging their beliefs and educating them in a way to empower self-management.

Despite the research behind passive therapies I still believe that there is a place for them and that due to our lifestyles of working at 100 miles an hour, meeting deadlines, our stress levels increasing (some interesting science behind stress, check out the TEDx video in the Audio/video section), sitting for long periods throughout the day, some of us getting very little exercise, sustaining an injury etc there is a place for it because of the neurophysiological, reflexogenic and psychological effects (reference). Think beyond the clinical and consider the social and the educational aspects you can achieve with hands on therapy.  Another interesting TED video here explains how we do live at speed and being able to embrace the art of slow is important to avoid burnout in children and adults. So getting a bit of manual therapy can help to slow down the fast paced lifestyle and help to engage with more empowering approaches.

So some form of passive therapy whether it is acupuncture or massage may help provide some pain relief but at the same time educate about pain science – explaining the underlying mechanisms of pain and how exercise enhances healing tissue can facilitate a self-management behaviour. As a health professional that has a relatively good understanding of passive therapies, pain science and exercise rehabilitation providing a holistic approach to injury management supported with sound evidence is important to continue promoting health, wellbeing and independence. To use a passive therapy to achieve this is alright by my book.

Thanks again for having a read, if you have any comments to share with other readers please leave them below.