‘Now you see it, now you don’t’ is a popular idiom that magicians use whilst performing illusions, with the intention of leaving the viewer flummoxed. The phrase is used to express that something is gone without clear explanation of how and why.

Take the rubber hand illusion (RHI) for example, this is an interesting neurological phenomenon that can leave people flummoxed about how it occurs, particularly when you add in a motor component. It may seem like magic but in this case, there is an explanation for this very popular visual and tactile illusion. Briefly, the RHI explains how neuroplasticity is a very dynamic and a real-time process. That within a short space of time and with the appropriate visual and tactile stimulation the brain can adopt the rubber hand as if it was part of the body (Botvinick and Cohen, 1998). 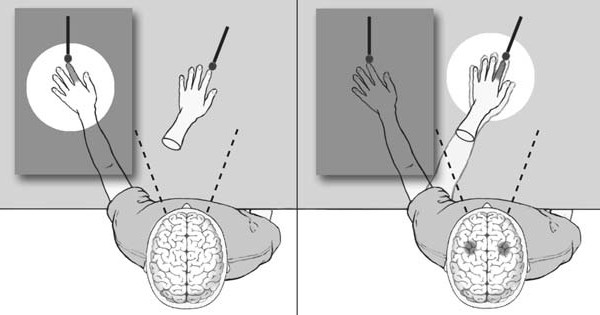 ‘The strength of the RHI depends on the cross-modal congruence between what a person feels via the somatosensory pathways and what they see (Tsakiris, 2010).’

Interestingly, I’ve found the above quote to be pertinent when working with people with Complex Regional Pain Syndrome (CRPS). In that when viewing the reflection of their unaffected limb being stroked, a mis-match in tactile feedback appears evident in the affected limb (obstructed from view) that is simultaneously being stroked. This is irrespective of high reported levels of pain that are common with CRPS commonly known as tactile allodynia.

It doesn’t stop there with the RHI, research has identified the illusion changes skin temperature and slows down the processing of tactile input from the real hand. Changes in skin conductance (sweat measurement) also occur in the actual hand when the rubber hand is threatened (Moseley et al, 2008b,c).

Interestingly in Moseley et al (2008b, c) series of experiments in healthy volunteers, his team found that autonomic changes (such as temperature change) were only evident in the replaced hand and not throughout the body. So, the RHI effect is maintained within the replaced limb and not evident in the opposite limb or other parts of the body. The drop in temperature was dependent on the ownership of the rubber hand and not down to visual or tactile stimuli. It was the result of the brain disembodying the replaced hand for the rubber hand. Now there’s more to it than that and I’ll be talking about spatial representation in a future blog.

Sensory information is an important component of our brain’s ability to get a sense of body awareness. Somatoparaphrenia is a neurological disorder that shows a decreased ability to recognise our own body (Kilteni et al, 2015). So, like pain, having an awareness of our body is a perception.

The RHI appears to induce some form of “body” neglect or somatoparaphrenia. This neurological phenomenon is commonly associated with neurological damage to the brain, such as in a stroke patient, and it appears that neglect like symptoms (and all the changes that occur with the RHI) can also occur because of musculoskeletal injury that triggers neurological disease.

One such condition is CRPS. Acute CRPS and chronic CRPS differ somewhat in that the former is often considered to be more of a peripheral injury whereas the latter is more a result of central nervous system disease.

Oh and just to try and avoid any scaremongering this is not the same as a stroke!

The most common type of injury resulting in CRPS is a fracture to the limb mostly in the wrist and hand or foot and ankle. In chronic CRPS neglect like symptoms can occur.  This has been shown by the increasingly popular method of left/right discrimination where people with CRPS take longer to make a judgement about an image of a hand that matches their affected hand (Moseley, 2004a, b).

So, what would happen if the hand of a healthy volunteer was completely removed in an illusion? Would people experience similar sensations of phantom limb pain, a phenomenon common in amputees. Well some very clever people using virtual reality have done just that. Kilteni et al, (2016) used a virtual reality headset or head mounted display (HMD) to expose two groups of healthy subjects to a virtual rendering of their own body. Both groups experienced the virtual body as their own.  The groups differed somewhat in that the experimental group were exposed to an amputee virtual body. Through visual, tactile, auditory and proprioceptive feedback the subjects in the amputee group experienced a sense of loss of movement of the limb in the real body. Subjects also reported a sense of numbness in the limb. Finally, the research team also monitored corticospinal activity using TMS, and identified a decrease in motor evoked potentials in the brain (in the actual body) from two specific muscle groups tested during and after the experiment.

This fascinating study opens more understanding of the sense of embodiment that humans experience and potential methods of how virtual reality could be used in people with complex pain problems such as CRPS.  This would be an interesting study to do with people living with CRPS to see if by removal of the hand would modulate pain.  We already know from studies that decreasing the size of the affected limb can reduce the individual pain experience (Moseley et al, 2008d). As virtual reality becomes more immersive and from the increasing amount of research that is released it won’t be too long till this type of approach will become part of the clinical toolbox.  I guess the question is, so what?

Thanks for having a read, comments are always welcome.